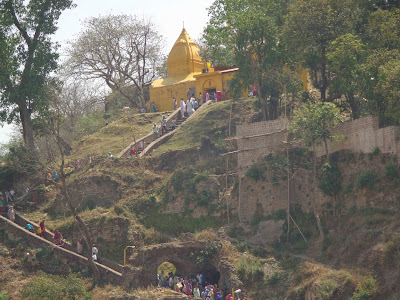 For power, victory and dominance over enemies.
The presiding deity is Goddess Bagalamukhi who is the controller of this powerful occult yantra.
Success in law-suits and competitions as well as pacify quarrels to the worshipper's advantage.
Effective in warding off evil persons, spirits and yakshan
Posted by Unknown at December 25, 2010 3 comments:

It is situated 41 kms. from Dharamshala and can be approached by road the natural cave temple of Trilokpur contains a stalactite and stalagamite is dedicated to Shiva. High on the ridge of the cave are ruins of a palace and baradari (audience hall) of Lehna Singh Majitha, Governor of Kangra hills during the Sikh rule.

Email ThisBlogThis!Share to TwitterShare to FacebookShare to Pinterest
Labels: TRILOKPUR


It is situated in the interiors of Kangra. The fort of Kotla lies almost half way to Gaggal in Himachal pradesh from Pathankot. This fortress was originally built by the Guleria Rajputs. It was seized during the reign of Raja Suraj Mal Pathania, and a younger brother, Madho Singh, was made the Quiledar or the commander of the fort.[16]